Marketing and Communication
City of Helsinki

Many of us imagine small children to be constantly active with an insatiable urge to move. However, the more advanced the research methods available have become, the more incorrect this misconception has proven to be. Estimates show that only 10–20 percent of children under school age get sufficient exercise to remain healthy. According to Children’s Physical Education Docent Arja Sääkslahti from the University of Jyväskylä, this figure is the best estimate with current research methods. The increased amount of physical education instruction provided for ever younger children is not in itself enough to ensure a sufficient level of physical activity. Children under school age should be moving for at least three hours every day.

The inactivity of the adult population has been a hot topic in recent years, while the low level of exercise and inactivity of children under school age has received less attention. This is partly due to a false belief that our children are constantly being active. Surveys have shown that the majority of parents are convinced their children are getting enough exercise. However, objective mobility indicators reveal the stark truth. Roughly 80 percent of children under school age do not move enough. In Helsinki, this means that at least 36,000 children are getting too little exercise to support their health.

‘When adults look at children at play, their attention is almost always drawn to those who are moving rather than those that are staying put. This can easily create a misconception that all children are constantly being active. Even though studying young children’s activity levels is not without its problems and more research data is needed, what can be said with absolute certainty is that most children do not get enough exercise. Of course, there can be quite significant differences between individuals, but all in all physical activity is a natural way for a child to be, play and learn. Due to increased inactivity, the motor skills that affect children’s cognitive abilities, mathematical skills, literacy and performance at school have deteriorated over the past 20–30 years. Furthermore, the differences between those children who are active and those who are not are increasing,’ says Sääkslahti. 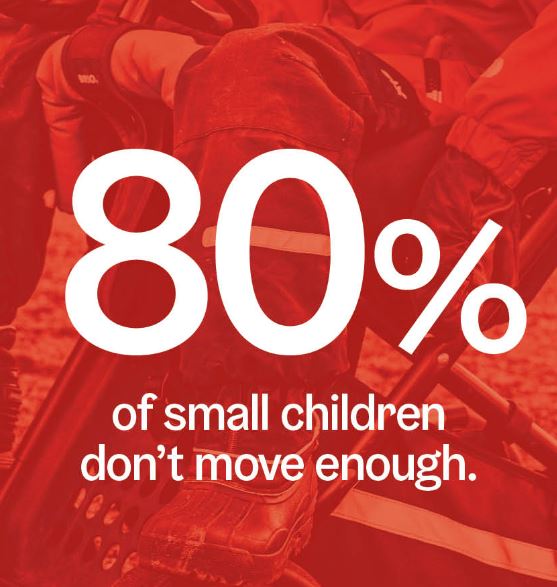 Let the children be active! A physically active child is a happy child.

The way children move is often dependent on the choices of the adults around them. Time constraints, an excessive need for safety and replacing outdoor games with screen time have reduced the amount of natural physical activity. Heavy workloads and busy daily lives often restrict the time that adults have to play with children. Instead, a common way to entertain a child and get them to wait calmly is to turn on a smart device. A tendency towards inactivity should be changed during early childhood, because our physical activity habits begin to form at age three. By spending time outdoors and being active together, parents can act as role models for their children and enjoy time spent being physically active together. People are likely to follow their learnt behaviour patterns throughout their lives.

‘We should take children’s inactivity seriously, because if they are not allowed to be children and move in ways that come naturally to them, their quality of life will suffer later in life. The problem is that few of us grownups have the time or willingness to consider the long-term consequences of our choices. The effects of inactivity will not become evident until 5–10 years later. We tend to lead busy lives and focus mainly on things that allow us to see results quickly. Therefore, we seldom realise that small, everyday decisions that restrict the amount of physical activity will not be good for children in the long run,’ Sääkslahti says emphatically.

In addition to our daily decisions, the physical environment has an effect on children’s activity level. Children who spend time playing outside in a varied environment have better motor skills. In urban areas, in particular, outdoor games require a safe place that is near a child’s home. If the place where a child goes to play or attend hobbies is far away, the child is forced to stay inactive in a stroller or car. This reduces the time that they have available to move and act in a natural way. Physical activity must be better taken into account in urban construction so that anyone can do it. The key question is whether the surrounding people and the environment allow children to move in their preferred way.

We all share the responsibility for young children’s physical activity – none of us can solve the problem on our own. Instead of us getting stuck in assigning blame for the inactivity, we should think of all the roles that we can assume to influence the amount that children move. It will take everyone’s input to solve this problem.

How can you tell whether your child is getting enough exercise?

‘A child has had enough physical activity when they have the energy to do things, eat well at mealtimes and sleep calmly after an active day. Sufficient daily exercise guarantees a state of balance where various health-promoting elements support one another. Exercise makes children hungry and increases their appetite. Food, in turn, provides energy, allowing the children to remain active, and physical activity burns energy, making it easier to fall asleep. Children accumulate a sufficient amount of exercise throughout the day, not in single individual sessions. A physically active child is a happy child,’ Sääkslahti says.

“Why should I bother exercising anymore?” – you can truly influence your own functional capacity

Barriers to mobility are not always physical

Six ways to support the active life of an elderly person